Our sweet English bulldog, Abbie, began showing concerning symptoms of excessive water drinking and frequent urination. After observing her and noting that she was continuing to eat and play, she saw the vet Saturday morning, August 28. After an illness examination, test results showed that her calcium levels were high. Further blood tests were done and sent off, but by Sunday night she began showing additional symptoms.

She saw the vet first thing Monday morning, and he started her on an IV. Dr. Broaddus did additional diagnostic blood tests. He needed to pinpoint the cause of the high calcium, so that a diagnosis, prognosis and treatment plan could be determined. After receiving fluids and staying the night, she seemed to be feeling better, so she came home Tuesday evening.

When she came home, it was apparent that she was not feeling like her normal self, and her belly was bloated. She continued to drink water, but was very selective on what she would eat. Chicken lunchmeat and peanut butter banana dog treats are pretty much all she would eat as much as we attempted to coax her into eating. We continued to wait on the test results and finally heard from the vet Wednesday evening. He indicated that her adrenal glands were normal, but there was a situation with her parathyroid gland. He recommended a referral to a specialist and indicated he would call for an appointment the next morning.

Abbie rode in the passenger seat and gazed at me during the hour long drive to Tulsa. I told her we were going to make her feel better and everything would be okay. Abbie was seen by Dr. Johnson at Oklahoma Veterinarian Specialists at 10:30 am on September 2. After examining her, the prognosis was bleak. She had several fast-growing masses in her abdomen and was already in kidney failure. He felt that the best option for her was to transition.

We spent some time talking to Abbie prior to her passing. She milled around the room probably wondering where she was and what she was doing there. She licked some dirt off of Brooks’ ankle, and he reached down and pulled her up for an upside kiss. I gently smooshed her face and kissed her on the mouth like I would often do. She laid down, closed her eyes, and I watched her take her last breath all the while continually repeating to her, “I love you, Abbie.”

We brought her home, and Brooks buried her under some trees on our property. She is wrapped in her baby blanket and has her red ball, stuffed alligator and favorite Frisbee with her. Brooks created a beautiful memorial for her and even designed a plaque that is being made by Garden Deva. Although our hearts are hurting, we are doing our best to remember the time we had together.

Norma Abigail Wilson, born on June 5, 2019, became a part of our family on September 23, 2019. Affectionately known as Abbie, Abbs, Boo, Doodlebug and many other endearing names. She was cherished from the beginning. She was curious, aware and challenging at times, especially her first year. We had to keep her from eating the mulch in the flower beds and quickly learned which toys were Abbie approved, meaning which ones she couldn’t destroy and attempt to consume.

Abbie was easily distracted by the sights and sounds of nature when she was supposed to be going potty. She learned to ring the jingle bells hanging on the door to let us know when she needed to go. However, she quickly learned that ringing those bells would also let her go outside to meander around. We were never quite sure if she was playing or really had to go. She actually trained us with those bells, although Brooks wasn’t as quick to move since he knew she was playing a game with us. She was always rewarded with a treat for going potty and would often put on quite a show after doing her deed.

Abbie was quite active for being a bulldog and would bring her toys to us to play. She loved her balls and playing with her Frisbee. As much I attempted to keep her toys picked up, she would inevitably knock over the buckets they were contained in to find her favorite toy of the moment. She loved playing tug o’ war with her French bulldog sister, Pepita, aka Petey, and loved being in her dachshund sister, Daisy’s space. Understandable, Petey and Daisy are missing Abbie as well.

Abbie never quite learned to drink from her water bowl without making a mess. I would habitually wipe the water trail that led across the kitchen floor from her bowl to the living room. Needless to say, those drops of water have been noticeably absent, too.

Abbie slept in our bed with the other girls. For a period of time, she would sleep under the covers with her chin on my belly. Her favorite spot was above my head. I would move my pillow down, so she would have space to lay. She would also rest her head next to mine. There is nothing quite like falling to sleep with a bulldog snoring in my ear.

Our son described Abbie’s life as a beautiful firework display. He said it burned bright and was pretty, but didn’t last long.

The past few days within our home have been very quiet and Abbie’s presence is noticeably missed. The final days and moments continue to replay in our minds. We are grieving and still have many questions regarding this situation – Did we do enough? Would the outcome have been different if she had been seen sooner? Could this have been prevented? What did we miss? What caused this?

Even though we may never know the answers, I am absolutely sure that Abbie knew that she was loved and cherished immensely. 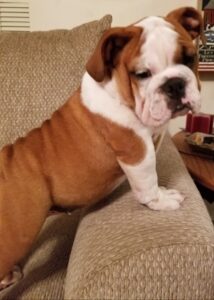 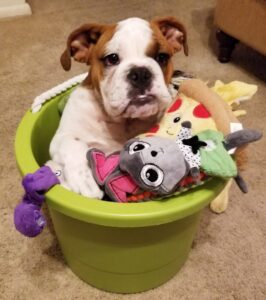 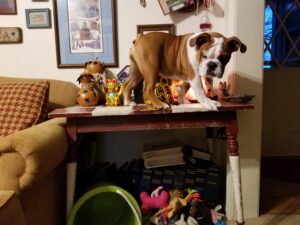 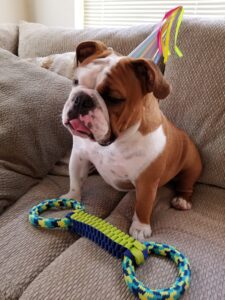 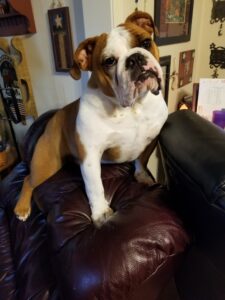 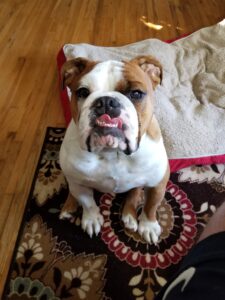 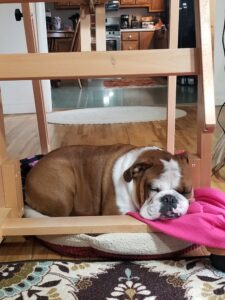 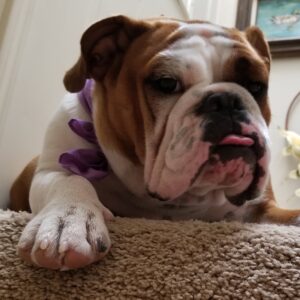 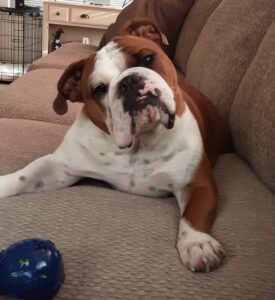