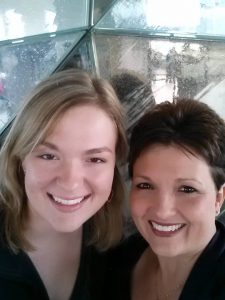 Two weeks ago, Caitlin and I visited where she would be working for the summer in Connecticut. She started working there just 2 days later on May 19. Tonight, she is flying back home.

A student at the University of Arkansas, the opportunity came into her awareness last fall, and she interviewed via phone several times. The position was offered to her early spring, and she accepted. In doing so, she turned down an opportunity to return where she worked last summer and also a trip to study abroad in Italy.

She shared her excitement in her blog titled, Here goes nothing (well actually everything). Parting ways with her that Thursday, I felt very emotional and attempted to hold the tears at bay while making my way back to Oklahoma. I didn’t have a good feeling, but also knew this experience was part of her journey.

I had a vision on the flight back from White Plains, NY. I could tell that I was at the country club, but the image was shrouded. The next morning, I had a similar vision, and this time a checkered pattern covered the images. I asked Cyndy Green of Spirit Fair for some insight regarding what I was seeing. She said, “They [Spirit] said the black and white boxes were a message about not thinking or seeing it in black and white. She need not decide on her job – if it is good/bad, it is right/not right for me at this time. They were suggesting she wait and kind of breathe to see beyond the black and white thoughts to a middle ground. Like xxx is good, or this part might work out well. It was to move beyond black and white thinking to see more of what the reality could potentially be for her.” I chose not to convey this insight to Caitlin, but rather to wait and see for myself what transpired.

After working just a few days, Cait realized everything was not what it seemed or what she was told it would be. I let her know then that it was okay to come home, but she decided to give it more time. Of course, she had her own perception of what the job would entail based on the information she was provided verbally and in writing. One aspect is that she was told she would be guaranteed 40 hours a week, which was great. On the other hand, she was actually working 12-15 hours a day with 1 day off a week. Granted, she only worked 11 days total, but the season was just starting, and there was no indication the hours would be any less. She was physically exhausted, her feet hurt and she was dehydrated. She was mentally and emotionally exhausted as well.

Speaking with her on Sunday after a tough Saturday, she made the decision that this paid internship/summer job was not the right fit for her. Through tears, she initially stated that she felt “defeated” and that she was giving up, but she also knew how choosing happiness was important. I made it very clear to her that I did not want her to be miserable for the next 11 weeks. I also told her it was important that she conveyed verbally to the General Manager why she was leaving. During the conversation yesterday, the GM wanted Caitlin to give them another chance and at least 2 more weeks, but I had already changed the return flight at her request.

Caitlin expressed her feelings in her blog titled, Back to Oklahoma (Arkansas) I go. She wrote, “For the sake of myself and for my overall happiness and health, I need to go home and that is what I am doing. I know in my heart that I do not deserve to be unhappy, and so I had to make a change immediately.”

She also conveyed, “I haven’t quite decided what I was supposed to learn from this experience, but I do know I was meant to come here if only for a short while and maybe just maybe, things will change by me leaving. I have peace with the decision I have made, and I know, just like anything else, it will all work itself out in the end.”

With that said, always choose happiness when you are able to. I understand that life has its challenges, but we always have control of how we choose to perceive and respond to an experience. As I stated before, I know that Caitlin was intended to have this experience, and I also know that she was meant to be where she was for the experience of others as well. In addition, taking care of ourselves and our overall well-being is essential for our physical and mental/emotional health.

If you aren’t happy, do something…. 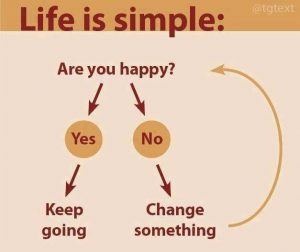 Shelly Wilson is an author, intuitive medium and conscious creator who is passionate about helping people wake up to their greatness. She supports others as they navigate their own journey into consciousness to experience aliveness.