Skip to content
Home Uncategorized The Girl with the Dragonfly Tattoo

The Girl with the Dragonfly Tattoo

The message of the dragonfly greeted me strongly a few years ago when I visited the spa at The Canebrake in Wagoner, OK. I was enamored by a piece of art exhibited in its rotating gallery and knew immediately that it would be coming home with me.

The artwork itself spoke to my soul, but the paper attached to the back of the piece noting the dragonfly’s symbolism resonated with me deeply. Although the origin or author is not indicated, it states the following:
Maturity and Depth of Character
The dragonfly in almost every part of the world symbolized change and change in the perspective of self-realization; change that has its source in mental and emotional maturity, the understanding of the deeper meaning of life.

Power and Poise
The dragonfly’s agile flight and its ability to move in all six directions exude a sense of power and pose – something that comes only with age and maturity. The dragonfly can move at an amazing 45 miles an hour, hover like a helicopter, fly backwards like a hummingbird, fly straight up, down and on either side.

Defeat of Self-Created Illusions
The dragonfly exhibits iridescence both on its wings as well as on its body. Iridescence is the property of an object to show itself in different colors depending on the angle and polarization of light falling on it. This property is seen and believed as the end of one’s self-created illusions and a clear vision into the realities of life. The magical property of iridescence is also associated with the discovery of one’s own abilities by unmasking the real self and removing the doubts one casts on his/her own sense of identity. This again indirectly means self-discovery and removal of inhibitions.

Focus on Living in the Moment
The dragonfly normally lives most of its life as a nymph. It flies only for a fraction of its life and usually not more than a few months. The adult dragonfly does it all in these few months and leaves nothing to be desired. This style of life symbolizes and exemplifies the virtue of living in the moment and living life to the fullest. By living in the moment, you are aware of who you are, where you are, what you are doing, what you want, what you don’t, and are able to make informed choices on a moment-to-moment basis.

The Opening of One’s Eyes
The eyes of the dragonfly are one of the most amazing and awe inspiring sights. Given almost 80% of the insect’s brain power is dedicated to its sight and the fact that it can see in all 360 degrees around it, it symbolizes the uninhibited vision of the mind and the ability to see beyond the limitations of the human self. In a manner of speaking, it also symbolizes a man/woman’s rising from materialism to be able to see beyond the mundane into the vastness that is really our universe and our own minds. 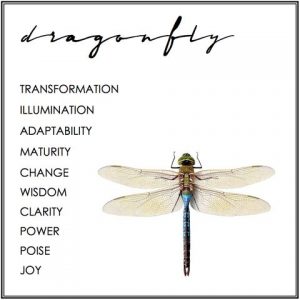 The symbolism embodies our spiritual journey into consciousness – one of awareness and transformation. Living in rural Oklahoma, dragonfly has crossed my path physically numerous times in the past few years. I instinctively knew it would be the next tattoo I attained. The hummingbird, bluebird and three different butterflies already have their place of significance. Rather than rushing, I recognized that the perfect image would come into awareness, and the timing would be right.

In the meantime, I wanted to have the tattoos I already have recolored and two of them enhanced. Through a series of synchronistic moments, Jacob Rachal of Cherry Street Tattoo came into my awareness last fall. After a brief consultation, an appointment was scheduled for early December. I was extremely pleased with his creative ability and beautiful spirit. I mentioned to him then about the dragonfly tattoo, but I wasn’t sure what it would look like or even where it was going, so I knew I needed to wait.

As 2016 closed and 2017 began, the energy felt fresh, new and inspiring. While shopping for cards at Target, artist Kathy Davis’ work came into my awareness. I loved the beauty and simplicity of her art and immediately recognized that her work would be inspiration for my tattoo. 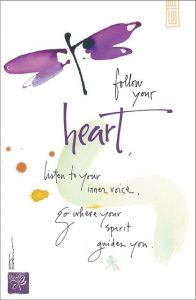 After assessing placement of my other ink, I decided the inside of my right wrist would be the perfect place. At first, I felt a bit of anxiety along with the thought of “what would people think?” Quickly moving through the fear, I knew this relatively small image was the next step on my journey to release the concern of what other people may think of who I am or what I do.

Reaching out to Jacob with my idea, his next available appointment just happened to be on Valentine’s Day, which was the perfect day to show love to myself with this symbolic message. According to Ted Andrew’s Animal Speak pocket guide, dragonfly means time to shine. It says, “Trust in the power of your light and your perceptions to succeed. Efforts are maturing. Spiritual path is ahead.” I chose the word “shine” to accompany the image inspired by Kathy Davis’ art. Your magnificence is an expression of the Universe are the words noted on the piece of art, and thus a reminder to shine our Light brightly, while feeling empowered and safe to do so.

By living in the moment, each day I am becoming more aware of who I am, where I am, what I am doing, what I want and what I don’t. I am able to make informed and conscious choices on a moment-to-moment basis. I am awake and aware. I am thankful and feel blessed to be on this journey into consciousness! 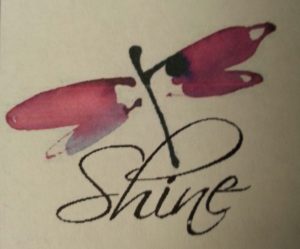 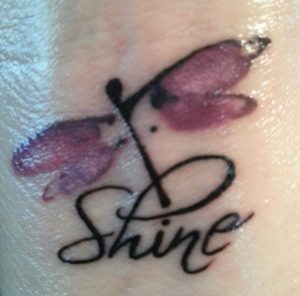